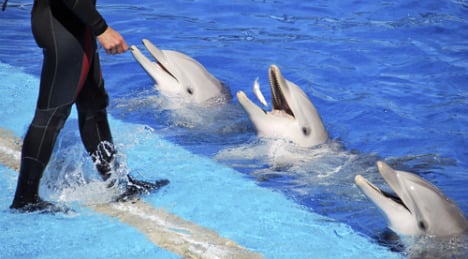 The body of José Luis Barbero was discovered on the night of Saturday, March 7th, in his car in a car park at Palma de Mallorca airport.

The trainer, who worked at Marineland on the Balearic island of Mallorca, had recently been accused of mistreating dolphins when a video was released on YouTube reportedly showing Spanish trainers hitting and kicking the animals.

Barbero was due to start work as vice-president at the Georgia Aquarium in Atlanta, USA,  this month but the job was put on hold pending an investigation into the allegations of abuse.

Civil guard police, confimed that the dolphin trainer had been missing since Tuesday, and that his body was discovered on Saturday. They said there were no signs of violence.

"José Luis was the victim of a ferocious campaign against his honour, which began with the distribution of manipulated audio-visual materials, followed by numerous orchestrated attacks on social networks, judging him without giving him the option to defend his innocence," Garbiñe Plazas, spokesperson for Marineland, told The Local in a statement.

"José Luis was a great professional with an exemplary career devoted to animals,  he was awarded some of the most prestigious prizes worldwide and pioneered the development of social welfare programmes.

"Those who were lucky enough to meet José Luis have no doubt about his love for animals, to whom he dedicated his life with passion," Plazas added.

Barbero received death threats after the video was released and recently made a statement accusing dolphin charity SOS Delfines (SOS Dolphins) of editing the grainy footage to make it seem like the trainers were hitting and kicking the dolphins when they were not.

Georgia Aquarium Chairman and CEO Mike Leven, in a statement to the US network Fox 5 news, said: "Sadly, (Barbero) and his family received death threats, and groups and individuals rushed to judge him. He was not given the right or the privilege to be considered innocent until proven guilty… His death is untimely, unnecessary and unjust."

The statement continued: "Initial reports suggest that he allegedly ended his own life. He was a husband, a father and a grandfather who dedicated nearly four decades to caring for animals. We at Georgia Aquarium were proud to have had him serve periodically as a consultant to our organization over the past eight years. His service with us was exemplary.

"After allegations were levied against him, we took the situation very seriously. Georgia Aquarium began a search for truth in hopes of disproving these unsubstantiated claims.

"We were not given the chance to thoughtfully and thoroughly review the allegations against him before activists, consultants and some in our own community tortured him with enough hatred to cause him to allegedly take his own life.

"I hope the death of Jose Luis Barbero teaches those who were quick to condemn him a lesson about being hasty to charge and indict."