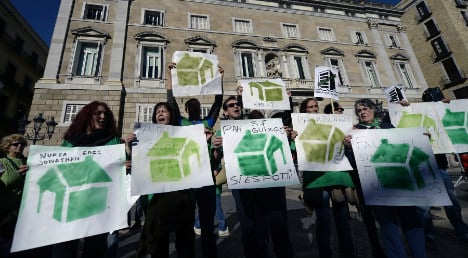 Demonstration by PAH in Barcelona, May 2013.Photo: Lluis Gene / AFP

The number of foreclosures on main residences increased by 7.4 percent over the previous year to 34,680, the National Statistics Institute said.

The total number of foreclosures, including holiday homes, offices and farms, rose by 9.3 percent to 119,442 last year.

Home foreclosures have become a stark symbol of an economic crisis in Spain sparked by the bursting of a decade-long property bubble in 2008.

Citizens' groups often rallying outside homes to prevent residents being turned out into the street.

With Spain facing a string of elections this year, starting with a regional election in Andalucia on March 22 and ending with a general election expected in November or December, foreclosures are a hot campaign topic.

Spain's ruling conservatives have touted that the crisis is over and the eurozone's fourth-largest economy is on the road to recovery as it has enjoyed modest but steady growth since it emerging from recession in mid-2013.

The economy expanded by 1.4 percent in 2014, the first full-year of growth since the property bubble burst, throwing millions of people out of work and forcing the government to seek a 41.3-billion-euro ($46-billion) EU bailout for the nation's financial system.

Opposition parties point out that more than one in five people are still out of work, although the jobless rate has been declining slowly.