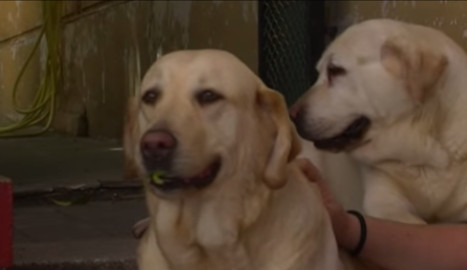 A Granada court ruled that Inmaculada Rodríguez and husband Nicolás García must also pay €3,000 ($3,300) in damages.

The couple's daughter has since started an online petition on Change.org to have the charges dropped and had gathered more than 74,000 signatures as of Friday morning, with a goal of 75,000.

The petition has even gained the support of Spanish pop singer Melendi and television personality Frank Cuesta.

A neighbor has been complaining since 2010 that the dogs' barking is too bothersome.

"I had terrible tachycardia (rapid heart rate)," said the accuser, who wished to only be identified as J.C.M., according to El Correo. "Imagine the anxiety of having an exam and having to study and not being able to because dogs are bothering you."

The couple has continued to challenge the neighbors' complaints, going so far as to hire a private investigator to record the house for days to prove that their dogs were not barking.

They even had a veterinarian evaluate the dogs and write a letter declaring that labrador retrievers Nala and Greta were "psychologically stable and loving dogs that can live well with children, do not vocalize and do not urinate, defecate or behave abnormally."

A police report taken in 2012 after various neighbors complained noted that "you could not hear animals… they did not bark".

The couple have since moved house, taking 13-year-old yellow labrador Nala and her daughter Greta, 7, with them and insist they have had no complaints from their new neighbours but their former neighbours are pursuing them.

Prosecutors are now considering whether to raise the prison sentence to seven years and four months for each person for crimes against the environment.

The accuser has also challenged the sentence. Though they insisted that they had "no interest in sending the couple go to jail," they have called for more damages to be paid.

A provincial court is set to review the local court's decision in the coming weeks.