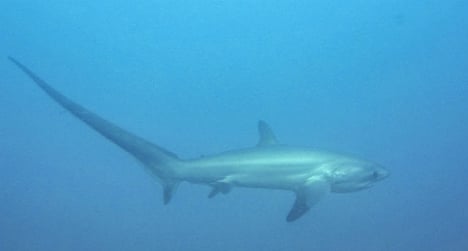 A thresher shark has been captured off the Catalan coast. Photo: Petter Lindgren/Wikimedia.

Just when you thought it was safe to go back in the water, fishermen off the Catalan coast have captured a shark, measuring in at three metres long and weighing 160kg.

The creature was captured off the coast of Arenys de Mar, in Sant Pol de Mar, north of Barcelona.

The thresher shark, named for its distinctive thresher-like tail, is in danger of extinction and is rarely found in the Mediterranean waters off Spain, usually preferring more tropical climates.

Known as a zorro, or fox shark in Spanish, the animal catches its prey, usually tuna, mackerel and squid, by thrashing its tail.

The shark is in danger of extinction and highly prized for its liver oil, as well as its fins used in the dish shark-fin soup. Photo of the dead shark: released

Local civil guard police came to observe the animal’s body (pictured), which was in cold storage at a local fishermen’s association, according to Catalan newspaper, La Vanguardia.

A 16-year-old boy was attacked by a shark along the same coastline in September 2014. He was attacked while playing in the sea in the popular Catalan tourist town of Salou, needing 30 stitches in his hand.