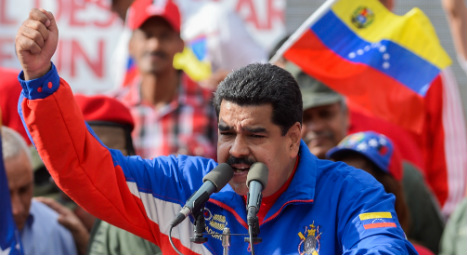 Maduro has called on the upper echelons of Spanish politics to "drop the fear" against Venezuela in the run up to this year’s general election.

Venezuela has been a hot topic in Spain because of its reported close relations with new left-wing protest party, Podemos. The party, whose name means 'we can', opened its books recently in a bid for transparency after Spanish media reported that one if its leaders, Juan Carlos Monedero, had carried out consulting work for late Venezuelan president, Hugo Chavez.

Monedero admitted dodging taxes on a payment he received from the Venezuelan government two years ago, which brought further attention to Venezuela in the Spanish press and threatened to embarrass Podemos, a party which takes a strict line on corruption.

"Venezuela is a country of peace and respect…stage your campaign in your own country and don’t include us in it, drop your campaign against Venezuela," Maduro said during his weekly television broadcast on Tuesday.

He insisted that the Venezuelan government wanted to have "the best relationship with Spain across all sectors – economic, political, everything."

"I think I could go to Spain, campaign for prime minister and win, because I’m in the Spanish press more than Rajoy," he joked, referring to Spanish Prime Minister Mariano Rajoy.

He also had a clear message for the Spanish leader.

"Mr Rajoy, if you want to be prime minister again, show the Spanish people that you are capable and don’t put us in your campaign, leave us in peace," Maduro said.

"It's true that before, Venezuela hardly ever appeared in the Spanish news and now everything is published, from reports to series' on the situation over there," Sonsoles García-Rendueles Castro, Communications Director for Yo Soy Venezolano, a community for Venezuelans in Spain, told The Local.

But for Castro, who was born in Spain but grew up in Venezuela, it is important to inform Spaniards about Venezuela so that the same political system does not take root in Spain. She told The Local that Podemos, the new left-wing protest party, remind her of "Venezuela 15 years ago".

"It scares me," she says, "I worry that I will have to escape from my country again like I had to 15 years ago in Venezuela."

Podemos are one of the main reasons Venezuela is cropping up more and more in the Spanish press, mainly due to stories about their leaders' links to the South American country.

The Venezuelan president also gave his best wishes to the Spanish people during the televised address and admitted to watching Spanish television series 'Aquí no hay quien viva' (No one could live here) with his wife, Cilia Flores, according to the report in La Vanguardia.