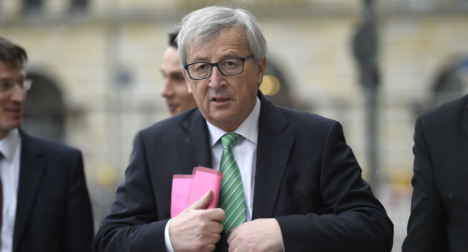 His comments appeared to contradict Spanish Prime Minister Mariano Rajoy who has repeatedly argued Spain has exited a crisis sparked by the collapse of a real estate boom in 2008 with a return to growth last year.

Rajoy's conservative Popular Party faces a year-end general election in which polls show it could lose its majority in parliament while new
anti-austerity party Podemos is poised to do well.

"With high levels of unemployment, and of youth unemployment in Spain, even if things improve we can't tell people, or ourselves, that the crisis is over," he added.

"What is honest, is to say that we will continue to face serious difficulties as long as unemployment does not return to normal levels. We are in the middle of a crisis. It is not over," he said.

He said that Greek Prime Minister Alexis Tsipras had begun to step up to his responsiblities but that a major problem remained.

"He must still explain that some of the promises upon which he was elected will not be honoured," said Juncker,  in an interview published Wednesday,  "The elections don't change the (EU's) treaties."

The comments are the latest in a series of unusually blunt exchanges between Greek and European leaders.

Tsipras stepped on toes at the weekend when he accused Spain and Portugal of trying to cut off EU funding for Greece to undermine its anti-austerity government. Germany labelled the comments "unusual foul play".

Tsipras' Syriza party won January elections on promises to reverse austerity policies imposed on Greece as part of its €240 billion ($267-billion) EU-IMF bailout, which many Greeks view as having aggravated the crisis that saw the economy contract by a fifth and one in four people thrown out of work.

But Tsipras was forced to at least temporarily postpone implementing his agenda in order to win last week a four-month extension of the programme to tap remaining funds and avoid a possible default.

Juncker acknowledged that the Greek crisis could be seen from different perspectives.

"We could be more flexible, but Tsipras's victory doesn't give him the right to change everything," he said.

Juncker referenced Podemos when he said: "if they win the elections they will be unable to keep their promises, to transform their programme into reality."

Juncker said the proposals of anti-austerity parties "are not compatible with European regulations: they will lead to a situation of complete blockage."