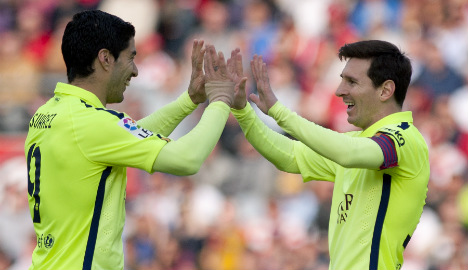 Ivan Rakitic opened the scoring for the visitors as he profited from a mishit Suarez shot before half-time and Suarez himself then prodded in the second just after the break.

Real can restore a four-point gap over the Catalans when they host Villarreal on Sunday.

Barca boss Luis Enrique rotated his squad once more as he made four changes from the side that beat Manchester City in midweek and it took Barca some time to get into their stride at Nuevo Los Carmenes.

Xavi was one of those returning to the starting line-up and he forced former Barca 'keeper Oier Olazabal into his first serious save from a rasping drive from the edge of the area.

Granada's offside trap frustrated Barca in the early stages, but they were caught flat-footed for the opener on 25 minutes as Luis Suarez was played in by Jordi Alba and the Uruguayan's mishit shot fell perfectly off the unfortunate Cala for Rakitic to slam home.

Messi came within inches of a stunning second 10 minutes before the break as he controlled the ball instantly on his left-foot before flashing a right-footed volley over the bar at the end of a flowing counter-attack.

However, the hosts were unlucky not to be level at half-time as the referee turned down huge penalty appeals when Dimitri Foulquier tumbled under pressure from Marc Bartra.

And moments later Claudio Bravo was forced into a stunning save to turn Javi Marquez's low shot behind for a corner.

Three minutes after the break, though, Suarez gave Barca the cushion they desired when he latched onto Rakitic's through ball and slotted home with the outside of his right foot.

Granada were handed a lifeline just four minutes later when this time Bartra was penalised for a foul on Lass Bangoura and Rico thumped the resultant spot-kick past Bravo.

Yet, in their push for an equaliser, Granada left more space in behind for Barcelona to exploit in the closing stages and were picked off again by a Rakitic pass into Suarez. The former Liverpool man then rode a challenge from Oier before squaring for Messi to roll the ball into the unguarded net.