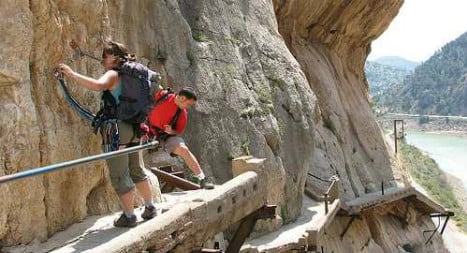 "The most dangerous walkway in the world" reopens in March. Photo: caminitodelrey.info

At the annual “festa més dolça”, 60 tons of sweets are given away during a colourful procession in the Gracia district of the Catalan capital. Horse drawn carts and floats fill the streets and the evening ends with a firework display.

The streets leading to the Castle of Javier are filled with pilgrims during the first two weekends of March as thousands flock to venerate San Francisco Javier. The origins of this festival date from the 19th century when the town was saved from a cholera epidemic thanks to the saint's intervention.

Each March in Sagunto, Valencianos celebrate Saint Joseph, the patron saint of carpenters. After months spent creating giant papier-mâché models satirizing politicians and popular figures of the day, the ninots are paraded through the streets before being burnt in a ferocious climax of bonfires and fireworks.

This classic car rally held since 1959 is only open to vehicles dating from pre-1924 and takes place between Barcelona and Sitges with participants dressing up in the costumes of the day. The event attracts genuine museum pieces with a prize given to those with the most original vehicles and whose drivers best manage to evoke the bygone era in which they were made.

Mystery of the Passion, (Cervera, Lleida) every Sunday during Lent

Every Sunday in Lent, the residents of Cervera don costumes and take part in a giant reconstruction of the Passion of Christ, a performance that takes almost six hours. The play has been staged in Cervera since 1481 with around 500 residents playing the roles.

Once considered the most dangerous walkway in the world, the path clinging to the cliffside over a gorge in the hills near Antequera has claimed the lives of people. Now the dizzying path has been completely renovated and made safe and will open to the public on March 28th. Tickets must be booked in advance.

Palm Sunday (Domingo de Ramos) is on March 29th so Semana Santa in Spain straddles the next two months. The first of many processions during Holy Week takes place on Palm Sunday, reenacting Jesus’ arrival in Jerusalem, with many of the best parades taking place in Andalusia.

A parade during Semana Santa (Holy Week) in Seville in 2014. Photo: Gogo Lobato/AFP

Competitors from around the world are heading to northeastern Spain in mid-March for fresh snow and the Snowboarding World Cup. It´s a great spectator sport and the aprés ski isn´t too bad either.

Fitness fanatics can take in a bit of sightseeing along the way as the marathon route passes by the Olympic village, the foot of Montjuic, Gaudi´s Sagrada Familia and Barça FC´s Camp Nou. If you are participating then don´t forget to 'carb up' with a pasta party laid on by organisers the day before.

Real Madrid face arch rival Barça at the Camp Nou in what always promises to be a clash of the titans.