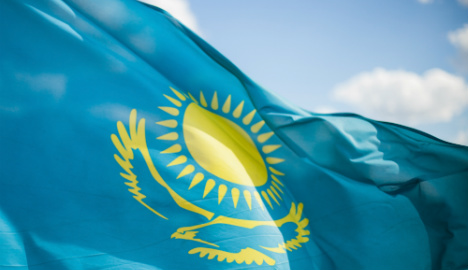 A photo of the Kazakhstan national flag: Shutterstock

He argues he is being politically persecuted by the Kazakh government which he says want to obtain information from him about Ablyazov, a foe of strongman Nursultan Nazarbayev, who has ruled the ex-Soviet country for over two decades.

The Supreme Court overruled a decision by Spain's interior ministry to deny Pavlov asylum on the grounds that he "posed a danger to national security".

The court said in its ruling that reports on Kazakhstan by Amnesty International, Human Rights Watch and the United Nations "show that Pavlov has reason to fear persecution".

It said the fear of persecution alone justified that Pavlov's demand for international protection be recognised.

The court pointed out that the Interior ministry itself described Pavlov as Ablyazov's "head of security" or "bodyguard".

Ablyazov, a former Kazakh energy and trade minister, fled his country over accusations he embezzled billions, was arrested on the French Riviera in July 2013 on a warrant issued by Ukraine and Russia.

Once close to Kazakhstan's elite, Ablyazov was jailed in 2002 for abuse of power and illegal business activities after co-founding and leading an opposition party, in a move widely seen as a bid to silence him.

He was quickly pardoned and released, however. Returning to finance, where he had made his fortune, he led the Kazakh BTA Bank, which also had interests in Ukraine.

But in 2009, he fled to Britain amid accusations he stole billions of dollars in state and investor funds.