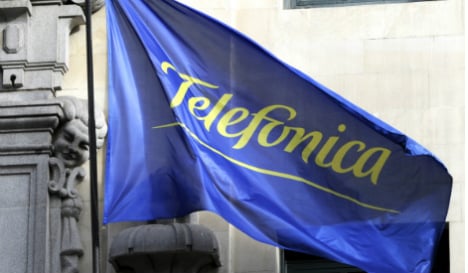 Analysts had predicted an annual result of 3.7 billion euros.

The group's key measure of operating income before depreciation and amortisation (OIBDA) fell 18.7 percent to €15.52 billion euros and turnover declined 11.7 percent to €50.38 billion, it said in a statement.

The group had exceptional costs including a €405 million restructuring and a €257 million decrease in the value of its stake in Italian holding company Telco.

Telefonica, with operations across Europe and Latin America, nevertheless is optimistic of turning around its fortunes in the coming years.

"A period of intense transformation… has strengthened the company, its growth potential and its financial position in just over two years," Telefonica CEO Cesar Alerta said in the statement.

Telefonica is responding to changes in "our customers' technological needs, which are characterised by a booming data usage", he said.

While it predicts further erosion of its OIBDA margin this year, it expects the measure to stabilise in 2016.

The group plans to step up its value-added activities such as fibre optic cable, pay TV and smartphones, and to focus on its main markets in Spain, Germany and Brazil, the statement said.

In Spain, whose economy in 2014 bounced back after six years of crisis, Telefonica saw a 7.2 percent drop in sales to €12.0 billion.

Sales in Germany rose 12.4 percent to €5.52 billion, boosted by the acquisition of E-Plus from the Dutch telecoms firm KPN.

Telefonica revealed last month that it was in talks to sell O2 to Hong Kong's Hutchison Whampoa, operator of the Three mobile network in Britain, for £10.25 billion (€14 billion, $15.9 billion) including £1.0 billion in deferred payments.

The Spanish group wants to pull out of the British market where it has been present since 2005 with the acquisition of O2 for 26 billion euros.

It has already sold its operations in the Czech Republic and Ireland.