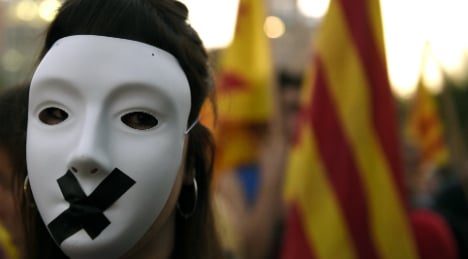 The court ruled that laws passed by the regional government of Catalonia in September allowing it to call and organise such votes was unconstitutional because only the central government had the power to stage a referendum on issues of sovereignty.

Spain's Consitutional Court suspended the laws on September 29 while it studied a complaint from Spain's central government which fiercely opposed the referendum and had argued that only it had the power to call such votes.

But the head of the regional Catalan government, Artur Mas, pressed ahead with a symbolic vote on November 9 staged by volunteers without an electoral roll.

Mas, a centre-right nationalist, argued the symbolic vote would allow Catalans to express their opinion even if it was not legal. Catalan officials said that out of 6.3 million potential voters, 2.3 million cast ballots, with roughly 80 percent of those who took part favouring secession.

Conservative Prime Minister Mariano Rajoy alluded to the court ruling during a debate in parliament, saying "Spaniards are equal".

"Many ties of affection unite us and many people do not think like you," he said, addressing Alfred Bosch, a lawmaker with Catalan independence party ERC.

Mas said the aim of the court ruling was "to try to stop us". He recalled that the opposition to the referendum is what led him to call an early regional elections centred in Catalonia on September 27 which will be centred on the issue of independence.

Prosecutors have filed suits against Mas for staging the symbolic independence vote.