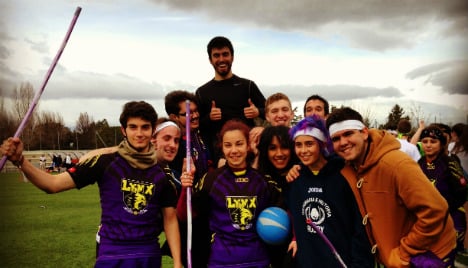 "Brooms up!" shouts the referee, as players lift their purple brooms between their legs and charge at one another, while the golden snitch prances and dances around the pitch, the prize everyone wants to get their hands on.

It’s a windy February morning and The Local has come to Madrid’s Complutense University to watch one of Spain’s burgeoning sports, the magical quidditch, made famous in J.K. Rowling’s Harry Potter series.

While Spain is usually more renowned as a nation of football lovers, quidditch is one of the country’s fastest growing sports and the Madrid Lynx team takes it seriously. They definitely look the part, decked out in their quidditch strip of purple, black and yellow, emblazoned with the team logo, a growling yellow lynx.

In the Harry Potter books and films, quidditch is played on flying broomsticks, so how does the Madrid Lynx quidditch team get around that small issue?

"Well, we can’t fly," says Bea López, whose head is wrapped in a quidditch scarf, "we’re working on that but… give us time."

What they lack in flying capabilities they certainly make up for in violence.

"Quidditch in the books looks really violent and to be honest that’s the same here," laughs referee Jean Blake as two players crash into each other behind her. "It’s more violent than you could ever imagine."

Quidditch mixes elements of rugby and handball, with all of the bashing, tackling and occasional bloody injuries they entail. One player sits cradling his bleeding foot, while another girl is helped off the pitch after being bashed in the nose during a particularly dirty tackle.

The Madrid Lynx players eat, sleep and breathe the sport, they have travelled around Europe playing teams from other countries and three of the girls have even got tattoos – three quidditch hoops etched onto their wrists – in homage to quidditch.

And the fun doesn’t stop once the players leave the field; many a budding romance has flourished among the broomsticks.

"We have a lot of slang around it, like you have a 'quidditch crush,'" says Blake.

While we may be none the wiser on the complicated rules of quidditch, what The Local did discover among the broomsticks was a sport that inspires real enthusiasm, and which could soon be winging its way to a sports pitch near you.