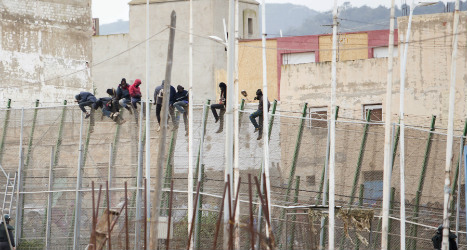 The human rights organization accused Spain of carrying out unlawful deportations to Morocco and the unnecessary or excessive use of force by law enforcement officials at the enclave borders.

"Thousands of migrants, including asylum seekers and refugees, some fleeing from Syria, attempted to irregularly enter the Spanish enclave cities of Ceuta and Melilla from Morocco. Reports of unlawful deportations and excessive use of force by Spanish border guards persisted," read the annual human rights report on 160 countries.

Amnesty highlighted the deaths of 15 migrants last February when Civil Guards used anti-riot gear, including rubber bullets and smoke cannisters, to prevent an attempt by a group of around 250 people to swim across the sea border between Morocco and Ceuta.

A judge last month ordered 15 Civil Guards to be appear in court over the drownings while another 24 officers are facing criminal charges for their treatment of migrants in both enclaves.

The report also said that hundreds of thousands of irregular migrants continued to have access to free health care limited, under a  2012 law that contravenes the European Social Charter.

Spain's treatment of Syrian refugees was also noted in the report.

"The rights to truth, justice and reparation for victims of crimes committed…continued to be denied," the report said.

Spain was also criticized for the "excessive use of force" used by police to disperse and detain protestors and said that freedom of assembly was being eroded.

"Throughout the year, hundreds of individuals were detained and fined for participating in spontaneous and mostly peaceful demonstrations of more than 20 people."

But Spain did win credit for ratifying the UN Arms Trade Treaty last April, and "in August became the first country to update its regulations on arms transfers to include the 'Golden Rule' prohibiting the transfer of arms where there was a real risk that they would contribute to human rights violations," Amnesty International said.

The report also had criticism for France, Italy, Denmark and Austria.