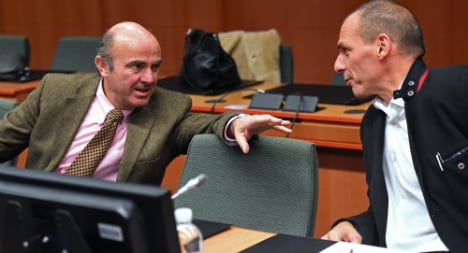 According to a report by Bloomberg, it is de Guindos who resorted to shouting during Friday´s behind-closed-doors meeting, as he railed against Varoufakis and demanded Greece adhere to the conditions of the exisiting bailout package.

The news agency cited two sources with direct knowledge of the talks.

Images from the Eurogroup meeting showed de Guidos and Varoufakis gripping each other´s hands with wide smiles on their faces.

But away from the gaze of the cameras, the two were at loggerheads reportedly, with de Guindos raising his voice at the Greek minister to tell him "to win the trust of his European counterparts and learn how politics is conducted at that level," Bloomberg reported that one of the sources had said.

It was de Guindos who also reportedly won agreement to hold a teleconference on Tuesday to scrutinize Greek plans to meet the conditions for extending the bail-out terms. The Greek government must submit their proposal by tonight.

"On the surface I would say it was an obvious case of 'good cop, bad cop' with de Guindos taking the bad cop role," Javier Diaz Gimenez, professor of economics and fiscal policy at the IESE business school in Madrid, told The Local.

He explained that Spain must also be particularly concerned over dealings with Syriza because of their alliance with Podemos, a party threatening to overtake Mariano Rajoy´s Popular Party in the polls.

"It’s obvious that the Spanish government is particularly concerned because there is a general election coming up and because of the strong alliance between Podemos and Syriza. So we see the government take a hardline against anyone who might be considered a threat," he said.

"Any government in the European Union is going to be concerned about what could happen next in terms of a Greek exit and especially a government facing a vote in the upcoming months, such as Spain," he explained.