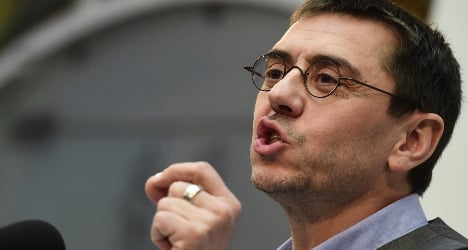 The Podemos founder says he is the subject of a ‘witch hunt’. Photo: Javier Soriano /AFP

Juan Carlos Monedero also refuted reports that he sought to benefit from lower tax rates related to payments made to him by Latin American countries for consulting work.

Monedero has been under fire since Spanish media reported last month that he received 425,000 euros ($480,000) in 2013 from Bolivia, Ecuador, Nicaragua and Venezuela.

Monedero, a political science professor and former adviser to late Venezuelan president Hugo Chavez, has provided much of the ideological underpinning for Podemos, which has soared in opinion polls ahead of elections later this year.

It is allied with Greece's Syriza, the leftist party that won elections there in January.

The reports said Monedero set up a firm called Caja de Resistencia to take payment of the funds, allowing him to pay a lower tax rate.

They also suggested the money could have been used to illegally finance Podemos, which was formed in January 2014.

"Not a single euro went from Caja de Resistencia to finance Podemos. Not one euro. It is a witch hunt," Monedero said at a press conference.

Monedero said he received the money from a development bank belonging to the Bolivarian Alliance bloc, or ALBA, a nine-nation grouping of Latin American and Caribbean countries including Venezuela, to prepare a report.

He denied his goal was to pay less tax when he set up the firm and accused Budget Minister Cristobal Montoro of being responsible for the release of his personal tax information to the press.

Monedero said he would file a complaint with prosecutors over the alleged release of his personal financial data.

The news that he received a six-figure payment, even if it was taxed properly and was not used to finance the party, hurt Podemos' claim that it is fighting for Spain's underclass against a "caste" of privileged politicians and bankers.