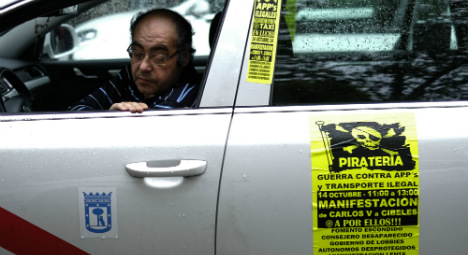 It was the first launch outside the United States of Uber's food delivery application.

For the moment the Spanish version of the app is only available in the northeastern city of Barcelona.

The company said the app will connect customers with restaurants already licensed to make home deliveries.

Some of the delivery staff will be drivers who offered rides via the taxi app before it was banned.

The company said it will make sure drivers pay their taxes on their earnings to see off criticism from those who accuse the company of fuelling the black market.

"We hope the company's image will continue to be what it should be, that of an innovative company that helps the user," the head of Uber in Spain, Carles Lloret, told AFP.

The UberPOP application puts non-professional drivers with their own cars in touch with passengers via their mobile phones or a website, for rides at budget rates.

A judge in December banned UberPOP from operating in Spain while the court examines a lawsuit by taxi drivers, who say drivers offering rides via Uber are not qualified.

Founded in 2009 in California, Uber has grown fast, luring passengers away from regular taxis. It operates in 200 cities in 54 countries.

But it has also been targeted by legal cases in the United States and several other countries, including India, Thailand and France.