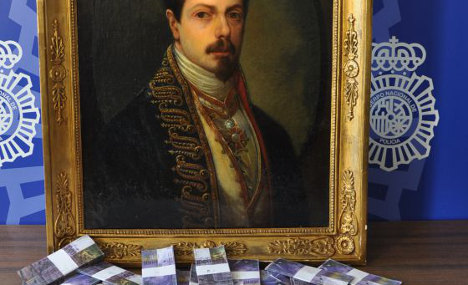 It’s a story that any dark-humoured scriptwriter would jump on without any hesitation. Photo: Policia Nacional

It’s a story that any dark-humoured scriptwriter would jump on without hesitation.

It all started in 2003, when the two brothers in question first came across the alleged portrait of Don Antonio Maria Esquivel, purporting to be painted one of Spain’s greatest artists: Francisco de Goya.

But when an authenticity certificate couldn’t be provided, becuase experts refuted that it was an original Goya, a Girona judge ruled they could keep the artwork without having to pay the remaining €250,000.

Seven years after the court ruling, the brothers decided they would try their own luck at selling the painting of dubious origins.

They found a potential buyer in an Arab sheikh, willing to pay €4 million for what he believed was a Goya masterpiece.

A meeting was arranged in the northern Italian city of Turin with a representative of the sheikh’s.

In return for the Goya and its certificate of authenticity (which they'd forged) they were to receive a first instalment of 1.7 million francs (€1.5 million).

The brothers also hired a moneylender to meet in their home city of Girona with the middleman who had arranged the deal with the Arab buyer.

Once they received the money in Turin, they called the loan shark and allowed him to pay the intermediary €300,000 as promised for setting up the sale.

The complicated transaction was finalized and for some time the siblings must have thought they were going to get away with it.

Then they arrived at a Geneva bank to deposit the 1.7 million francs into a Swiss bank account, Spanish news agency Europa Press reported.

It was there tha they were informed their fortune was nothing more than photocopied bank notes.

To make matters worse for them, customs in the French city of Avignon informed Spanish police that they’d come across two of their countrymen with a suitcase full of fake money.

On arrival in Spain the brothers were arrested and are now facing fraud charges.

As for the €300,000 they paid the intermediary, the money was real and borrowed from a local businessman who’s unlikely to ever see it again.

Presumably it ended up in the hands of the Arab sheikh, too smart to be outwitted by two rather mediocre conmen.