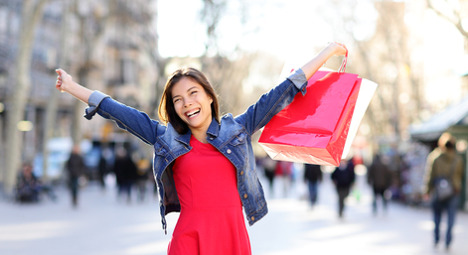 A record 287,866 Chinese citizens visited Spain in 2014, up 13.9 percent compared to the previous year, data from the UN World Tourism Organization shows.

And they’re usually not the sun-loving tourists who spend two weeks on Spain’s coastline before jetting back.

Chinese tourists tend to prefer city escapes, with the food, culture and shopping that goes with them.

Madrid, slap-bang in the middle of Spain’s peninsula, saw a staggering 46 percent rise in Chinese tourism in 2014, according to town hall figures.

What’s more, many of them visit Spain’s capital in low season, helping the tourism industry keep afloat all year round.

A study by travel website TripAdvisor is testament to this growing interest in Spain from the Far East, as most Spain-related travel searches on the site in 2014 came from China and India as well as Canada and Germany.

Ten Spanish cities have so far joined Chinese Friendly, a marketing network aimed at promoting their image and tourism credentials in the Asian superpower.

The move makes perfect sense as a recent UNWTO study predicts that by 2020 China will have the biggest bulk of tourists travelling abroad in the world.

Chinese Friendly CEO Kurt Grötsch told the Spanish edition of the Huffington Post that Spain could expect one million visitors from China that same year.

Even more appealing is their spending power. Between April and September of last year, Chinese tourists in Spain were responsible for 31 percent of the country’s tourism related revenue.

They’ve now surpassed Russians as the biggest spenders in Spain, with the latest data from consulting agency Global Blue showing a drastic 14.3 percent spending drop in 2014 among Russian shoppers.

In fact, 65 percent of the Chinese shopping revenue in Spain last year came from Barcelona’s Paseo de Gràcia and Madrid’s Barrio de Salamanca, two upmarket areas known for their high-end boutiques of the likes of Chanel, Gucci and Armani.

In 2013, each Chinese tourist that visited Spain spent an average €2,040 on a package deal plus €167 a day on shopping, mainly clothing.

It’s no surprise that Spanish tourism bodies, restaurants and hotels are going out of their way to attract more visitors from China, with express Mandarin courses for their staff, tax deductions for shopping and websites and apps directed specifically at them.

Even football giants FC Barcelona and Real Madrid have launched commemorative videos to celebrate the Chinese New Year, all recognizing the financial rewards that can be reaped from the ever-growing economic superpower in the East.