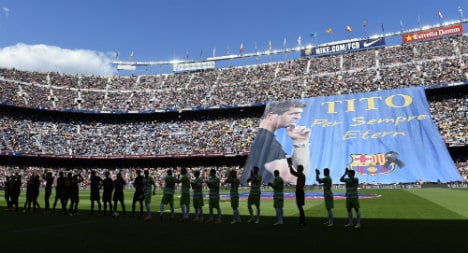 Vilanova died in April last year at the age of 45 after a long battle with throat cancer.

Having been Pep Guardiola's assistant during his glorious four-year reign in charge of the Catalans, Vilanova had led Barca to a record 100 points tally in winning La Liga during his only season in charge in 2012/13.

"He would have loved to have been here," said Vilanova's wife Montse Chaure.

"He said it was a privilege to coach the best team in the world and that he loved the players."

The naming ceremony was attended by the Barcelona first team as well as Vilanova's two children.

"From now on all the future generations that come to train at the Joan Gamper training ground ought to know who Tito Vilanova was," said Barca president Josep Maria Bartomeu.