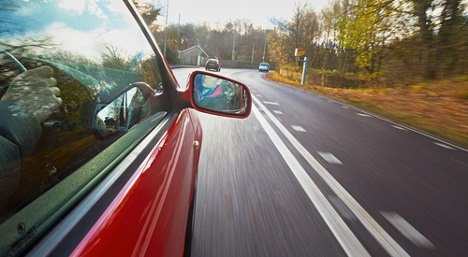 Driving at or above the speed limit in Spain used to entail its financial risks. Photo of car and speed camera: Shutterstock

Driving at or above the speed limit in Spain used to entail its financial risks.

Only last September, it was revealed that the Directorate General of Traffic (DGT) had secretly reduced the speed margin on cameras in a bid to fill their coffers with hefty fines.

By failing to make it public knowledge that speed cameras were taking a register of vehicles over the speed limit by 8km/h (before it was 12 to 15km/h), they raked in a staggering €384million in 2014, an average of just under€1 million a day.

The trend now seems to have been bucked by DGT director Maria Segui’s surprise decision to inform drivers of speed cameras’ locations.

“This initiative is being implemented so that drivers abide by the established speed limits, especially on stretches of road that have been identified as very dangerous,” Segui explained.

Drivers in Spain will now receive early warning of speed cameras’ presence, giving them a chance to put their foot on the brake if necessary.

They’ll also be able to view all the camera checkpoints, both fixed and mobile, on the DGT website.

Segui added that Spain is “one of the safest countries in terms of moving around” according to 2014 figures, but the sharp decrease in deaths over the past decade has now reached a plateau, with only three less road deaths than in 2013.

In fact, January saw a worrying 44 percent increase in road deaths in Spain.

“Speed in and of itself is neither good nor bad, the challenge lies in managing it,” Segui concluded.