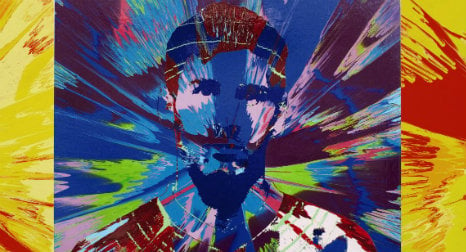 Beatiful Messi Spin Painting for One in Eleven by Damien Hirst. Photo:Sotheby´s

A work by British artist Damien Hirst entitled "Beautiful spinning painting of Messi for 1 in 11"  proved the top seller of the night at London´s Sotheby´s when it went under the hammer for €490,000 ($561,000).

The works were among those sold off to raise over €3 million euros for a project between FC Barcelona Foundation, Reach Out To Asia (ROTA) and UNICEF.

“The project aims to promote education via sport in Bangladesh, Nepal and Indonesia. The aim is to contribute to reducing the figure of 58 million children who are without the opportunity to go to school, an average of 1 in every 11 children in the world,” explained the catalogue.

Artwork featuring Gerard Pique was also auctioned off with a portrait of the centre-back by Italian artist Francesco Vezzoli raising €32,500.