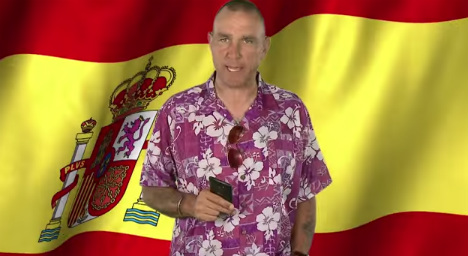 In a new advert for mobile phone company, Three, Jones, more known for playing gangsters than teaching languages, does his enthusiastic best to teach some essential Spanish phrases.

"We all love a bit of Costa Blanca!" says Jones at the beginning of the ad, before launching into a quick Spanish lesson.

With an accent veering from mainland Spanish, to Latin American by way of Watford, Jones then teaches "Hola, me llamo Vinne. Y tu?" ("Hi, my name’s Vinnie, what’s yours?").

From asking the way to the beach to chatting up girls in clubs, Vinnie has all the holiday lingo covered in the two-minute advert.

"Oye, me das otra cerveza, por favor," Vinnie capably translates as "Excuse me pal, can I have another beer please?".

"Oi! Come over here and get in this selfie mate!" ("¡Eh,¡Eh, tío! Ven aquí para que salgas en este selfie!") is another one of Vinnie’s Spanish gems.