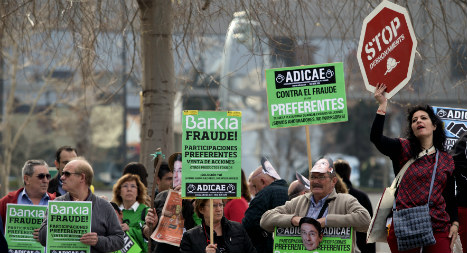 A Spanish court on Friday ordered former IMF head Rodrigo Rato and other bankers to pay an €800 million ($911 million) court bond as it investigates them over an ill-fated stock listing of the Bankia group.

It was the latest step in a long investigation into alleged fraud in the 2011 stock market listing of the bailed-out Bankia group and its former chairman Rato.

He is also a former economy minister of Spain and from 2004 to 2007 was managing director of the International Monetary Fund, which later played a leading role in tackling the eurozone debt crisis.

The National Court ordered the Bankia group, along with Rato and three other former executives, to jointly pay the bond to cover their possible liability in the case.

They are suspected of misrepresenting Bankia's accounts ahead of its doomed stock listing.

Bankia nearly collapsed in 2012 and had to be bailed out by the Spanish government for €24 billion.

Thousands of customers who say they lost their money after the listing have brought separate lawsuits against the group.

The ruling said the defendants could appeal against the bond but otherwise would have to pay it within a month or have their assets impounded.