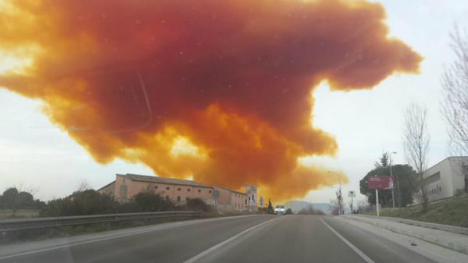 LATEST: Emergency services give partial all clear for people to leave their homes. Children, the elderly, pregnant women and people with respiratory illnesses are still advised to remain indoors.

A spokesperson from Igualada's town hall told The Local that the cloud has now cleared and "everything is returning back to normal".

The three people injured in the explosion are all "out of danger", the Catalan interior ministry confirms.

Schools said that they had been inundated with calls from worried parents while roads around the immediate area remain closed.

Earlier on Thursday, Catalonia’s Civil Protection authorities ordered people in the town of Igualada and its surrounding areas to stay indoors after an explosion caused a fire in a local chemical factory.

Residents of Igualada, as well as those of Odena, Santa Margarida de Montbui, Vilanova del Camí and Jorba were told to stay indoors, close all windows and means of ventilation and not leave to pick up their children from school until the danger is over.

The explosion and fire happened at Simar, a chemical distribution company and could have been caused by nitrous gases, reported Catalan daily, La Vanguardia.

The explosion was reportedly caused at around 9am on Thursday morning, when the loads of two trucks were mixed as they were being unloaded, causing a fire. Three people were injured in the fire, a worker and two drivers, suffering minor burns but are now "out of danger" confirmed Ramon Espadaler, from the Catalan interior ministry.

Spain's emergency services called for calm, via Twitter, and requested that people not put themselves at risk by going outside to take pictures of the toxic cloud "this is not a game", they tweeted. Residents were told to stay indoors, keep all windows and means of ventilation closed and to not leave to pick up their children from school, El País reported.

"Unfortunately there isn't much wind in the area so the toxic cloud is taking longer to disperse," Ramon Espadaler, from the Catalan interior ministry, told El País, earlier today. He also advised parents to "not go and pick up" their children, who are currently confined to their schools until the danger is over.

Line R6 of Catalonia's FGC railway company was closed between Pobla de Claramunt and Igualada on the Llobregat-Anoia line, while exits 554 and 555 on the A-2 motorway near Igualada were also closed.

An explosion in a chemical company caused two wounded and a toxic cloud in #Igualada http://t.co/5fq6eLEFsq pic.twitter.com/lQmzgb4qLY