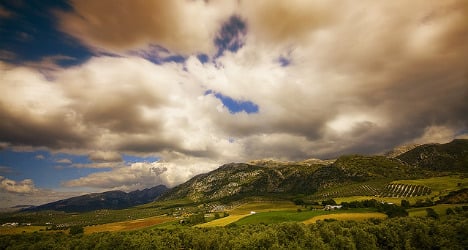 The Montes de Malaga, where the body of missing three-year-old Alejandro was found. Photo: Antonio Bravo/Flickr.

Police discovered the body of the little boy in a pond in an isolated spot around 15km outside Malaga after being led there by the child’s stepfather.

Alejandro had been reported missing on Monday afternoon at 5.15pm, when his stepfather told a security guard in a shopping centre in the town of Rincón de la Victoria that he could not find his stepson.

The child’s stepfather gave police four different versions of how he lost the little boy, the fourth of which finally lead Spanish civil guard to the location of the body, in the Montes de Malaga national park, at around 1am on Tuesday morning.

The stepfather first told police he had lost the boy in a shopping centre then changed his story, saying he had been looking for the child on La Cala beach.

When the police search proved fruitless, investigators retraced the stepfather’s footsteps, during which the man gave yet another version of the story. According to police sources quoted in local newspaper, Sur, the stepfather then told police he had thrown the child into the sea, later claiming the child might have fallen.

He finally led search teams up into the Montes de Malaga where the child’s body was discovered at around 1am local time.

The cause of death is yet to be established and will be confirmed by pathologists on Tuesday morning.