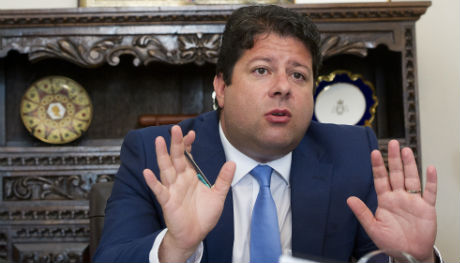 Fabian Picardo accused Ed Miliband of handing Spain a "rod with which to beat us" after wrongly suggesting that Gibraltar was operating as a "tax haven".

In a letter published in the Guardian newspaper over the weekend the UK opposition leader delivered an ultimatum to overseas territories and crown dependencies.

He said that if Labour wins the General Election those territories would have six months to open their books and publish a register of true owners of shell companies or face international blacklisting.

Picardo responded with a letter in which he said it was unfair to characterise territory as such because it was also part of the European Union and therefore subject to the same standards as all member states.

"I have already responded to the leader of the opposition. I have written to him this morning. I’m sure he will have been very disappointed in fact that I had to read his letter in the Guardian newspaper, that I haven’t in fact received his detailed communication," Picardo told Sky News.

"I think it is important to be very discerning about what Gibraltar represents. Gibraltar is not just an overseas territory, it is also an important part of the EU," he continued.

He pointed out that the misinformed words had "already been picked up by the Spanish press and are being used as a rod with which to beat us".

In the letter detailing why he thought Gibraltar was being unfairly targeted, Picardo warned Miliband that his advisors "may not be explaining the whole picture to you and may expose you politically".