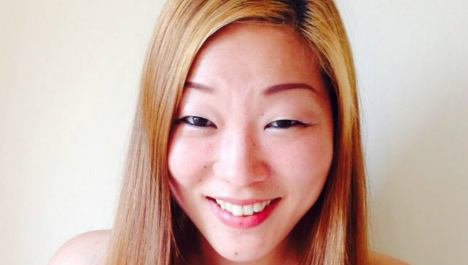 How old were you when you moved to Spain?

I was only five years old when I moved to Spain from South Korea with my family.

What do you like and dislike about living in Barcelona?

When I first moved here, I was amazed by this city. I never would have imagined all the things it had to offer: the architecture, the diversity of the people, everything was fun and a new experience. Barcelona is definitely a charming city and a great place to live but as much as it’s great, it can sometimes get a little crazy.

How did you get into fashion?

I’ve been sure since the age of 11 that fashion was the career for me. Whenever my parents asked me what I wanted to be when I grew up there was only one answer: a fashion designer!

What marks out Spanish fashion from the rest of the world?

It’s hard to say because Spain offers such a diverse style that can vary so much from one region to another, but in the case of Barcelona, people have an edgy, underground style mixed with comfort and modernism.

Anything and everything can be an inspiration for me. I´m mostly inspired by what I see, hear or touch. I am always aware of my five senses because you never know where your next inspiration will come from.

Do you think your international background differentiates you from other designers in Spain?

I think it does, yes. Having a different background, being raised in two different countries that have no similarities between them whatsoever, helps to open your mind to the bigger picture. What are the differences between South Korean and Spanish fashion culture?

From my point of view, the fashion cultures of Spain and South Korea go from one extreme to the other. In Spain, people are not so bothered about trends or fashion in general, unless they work in the fashion industry. On the other hand, in South Korea, you breathe fashion everywhere. No matter where you are or who you are with, even if you’re just at home watching TV, fashion is important. Being on trend is a must in South Korea. I assume this is one of the reasons why South Koreans are some of the biggest consumers in the world. I think a balance between Spain and South Korea would be a perfect match.

What are your fashion ambitions?

There are so many things I still want to achieve, I think for now, I´d rather keep that under wraps!