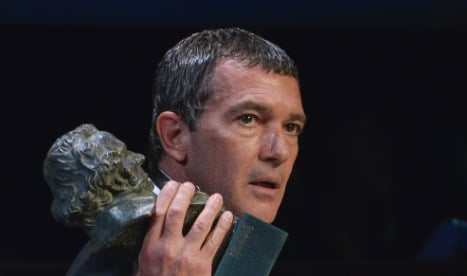 Among others, the movie about a police probe into the disappearance of two sisters after a local fiesta in rural Spain in 1980, won best film, best original screenplay and best director for Alberto Rodriguez at a ceremony in Madrid late Saturday.

Spanish actor Javier Gutierrez won the best actor prize for his role as a violent policeman in the movie — Spanish title "La Isla Minima" — while Barbara Lennie was named best actress for her role as an unstable housewife in dark comedy "Magical Girl".

Oscar-winning director Pedro Almodovar praised Banderas as he handed him with a lifetime achievement award, an honorary Goya, saying the 54-year-old actor "lit fire to Spanish movie screens in the 1980s" and then went on to become the first Spanish actor to achieve success in Hollywood.

Banderas made his film debut in Almodovar's 1982 screwball comedy "Labyrinth of Passion".

He went on to star in dramas such as "Philadelphia", horror films such as "Interview with the Vampire", the musical "Evita" and was the voice of the animated character Puss in Boots in the "Shrek" films.

"If I look back I feel old, if I look forward I feel young. The second half of my life starts now," the actor said in his acceptance speech."

Banderas has been nominated on four occasions for a Goya but has never received the prize before.

He dedicated the award to his 18-year-old daughter Stella del Carmen, saying she is "the person who has suffered the most from my professional commitments, my absences".

"Forgive me my daughter," he added.

Del Carmen is the actor's only child with US actress Melanie Griffith. The couple who first worked together on the set of the 1995 romantic comedy "Two Much" filed for divorce last year, putting an end to an 18-year marriage.

The awards ceremony comes after the best year for Spanish movies in terms of both box office and market share since the country returned to democracy following the death of dictator General Francisco Franco in 1975.

"This is a magnificent moment for our cinema," the president of the Spanish Film Academy, Enrique Gonzalez-Macho, said during his speech at the ceremony".