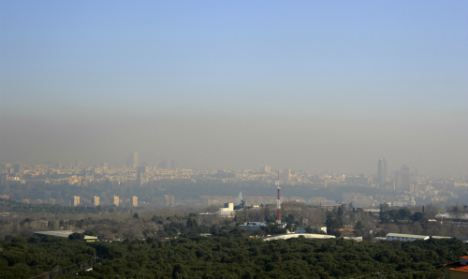 Like many residents of the Spanish capital, she suffered during several days of high pressure in early January. Now they want to cast off the beret for good.

Campaign group Ecologists in Action has taken up the case in the courts, suing local authorities for breaches of pollution limits.

It estimates that air pollution, mainly due to traffic fumes, causes 2,000 deaths a year in Madrid, a city of 3.2 million inhabitants, where there is about one vehicle for every two people according to authorities.

Ecologists in Action said that in the first two weeks of January Madrid had already exceeded one of the European Union's annual health limits for poisonous nitrogen dioxide gas in the air.

That made 2015 the sixth year in a row that Madrid had breached the limit since the current EU norms came into force in 2010, said the group. Madrid risks big EU fines for the breaches.

A study last year by the French association Respire ranked Madrid as the sixth most-polluted big city in Europe, a few places behind Rome, London and Paris.

Antonio Miguel Carmona, an opposition Socialist candidate for mayor of Madrid, citing doctors, claimed that hospital admissions for breathing problems had risen 30 percent in  the first half of January. No official figure was available.

Ecologists in Action in December brought a lawsuit against Madrid's mayor Ana Botella and her environment chief Diego Sanjuanbenito.

Sanjuanbenito dismissed that as a publicity stunt ahead of local elections in May. The court has yet to decide whether to hear the case.

Sanjuanbenito told AFP the number of instances when pollution measurements passed the EU limits has declined since the city hall, governed by Spain's ruling conservative People's Party, launched its clean-air plan in 2011.

The city has restricted access to some diesel vehicles in parts of central Madrid — as other cities such as London and Paris are planning to do.

And this week, city hall said that as of March 1 new traffic and speed restrictions will apply when nitrogen dioxide levels threaten to get too high.

For some, the measures have been too long in coming.

"Madrid has had this problem for quite some time and something should already have been done," said Pedro Leton, a specialist in air pollution at Alcala de Henares University near Madrid, before this week's measures were announced.

Madrid's nitrogen dioxide problem is blamed on a high proportion of its vehicles — 70 percent, according to Sanjuanbenito — using diesel fuel, which generally makes them cheaper to run than petrol ones.

"I think there is an excessive use of vehicles in cities, and that of course includes Madrid," Sanjuanbenito said.

"But if you banned diesel vehicles here, that would be extraordinarily costly and families in Madrid could not handle it at short notice."

In mid-January, the rain and wind came, clearing the skies over Madrid. But Conxi Grau knows the choking pollution will return with the next high pressure system.

"In this country, people do not seem to realise that breathing is the most basic need," she said. "The pollution problem is a constant battle."