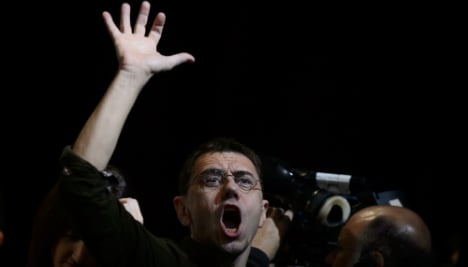 Juan Carlos Monedero, 52, a political scientist lecturer who was one of the founders of the left-wing anti-austerity party, presented a complimentary filing to pay personal income tax on the €425,000 ($486,000) euros consultancy fee.

Tax authorities began investigating Monedero last month when it emerged that he had set up a company in order to receive the payment for working as a political consultant to the governments of Bolivia, Nicaragua, Venezuela and Ecuador.

The company, Caja de Resistencia Motiva 2, was set up in 2013 to receive the payment for work completed in 2010.

The tax office was considering whether it was appropriate for Mr Monedero to have paid corporate tax on the earnings, which amounted to €70,000 rather than the €200,000 he would have been liable to pay in tax as an individual.

The tax adjustment made voluntarily by Monedero was reported in Spain´s El Mundo on Friday. The newspaper said Monedero had accepted he had defrauded the tax office and settled his account.

The Madrid Complutense University, where Monedero was a lecturer alongside pony-tailed party leader Pablo Iglesias, had reportedly opened a separate investigation into why 20 percent of the consultancy fees were not paid to the university, as stipulated in his contract.

The issue has threatened to embarrass Podemos, which takes a strict line on corruption, a stance which in part accounts for the massive surge in popularity that has seen it overtake the opposition PSOE in the polls.

Over one hundred thousand people took to the streets of Madrid on Saturday 31st January to show their support for the fledgling party in the "March for Change".