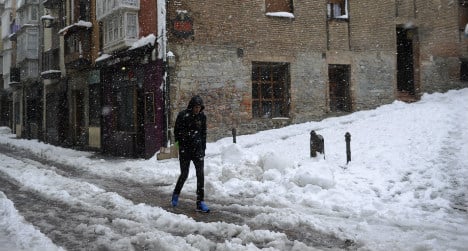 Over 9,000 children were off school on Thursday after classes were cancelled across northern Spain. Galicia was the worst affected region, but schools were also closed in Catalonia, Castille La Mancha and La Rioja.

Over 8,000 Galician students have been affected, the majority around the city of Lugo, Spanish media have reported.

In Madrid, a motorist died after his van was blown off a bridge in high winds, falling 35 metres , according to Spanish emergency services. Firefighters had to rescue a party of 64 children and four adults who were staying in Navacerrada, a popular skiing area to the north of Madrid.

Six German tourists are currently trapped in the Serra de Tramuntana mountains in Majorca. A rescue operation is underway.

In Majorca, six German tourists have been trapped the village of Sa Calobra in the northwest of the island. Spain’s Civil Guard has sent out a helicopter to rescue the group, who were trapped on Thursday by the bad weather and had to spend the night in a shelter near the village. The rescue operation is made more difficult by the fact the access roads to the village, in the Serra de Tramuntana mountain range, have been closed due to heavy snowfall.

In the northern province of Leon, civil guards rescued 19 "disoriented" Catholic pilgrims, including three Koreans, a South African and 13 children, on the road to Santiago de Compostela.

Town councils, along with the Red Cross and other charities, have put in place special plans to help the homeless and get them off the streets during the bad weather, reports Spanish daily, La Razon.

Spanish authorities have warned of a serious risk of flooding in Catalonia, northeastern Spain, and the Balearic islands while more snow and ice is expected elsewhere.