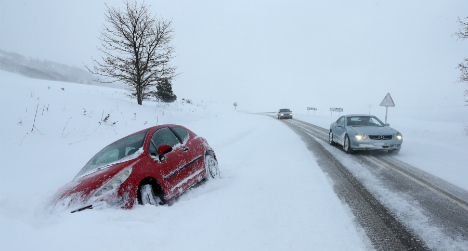 A stranded car on a road near Burgos. Photo: Cesar Manso/AFP

Spain has been shivering under unusually snowy conditions this week, with temperatures set to worsen over the weekend, according to the country’s national weather agency, Aemet.

The Military Emergencies Unit (UME) has rescued almost 300 people who were trapped in their vehicles because of the snow in Leon, Palencia and Cantabria.

The UME, along with Spanish police, rescued 220 people when their cars were trapped in snow on the A-67 motorway in Cantabria, northwestern Spain, according to Spanish daily, El País.

The UME, a branch of the Spanish armed forces responsible for providing disaster relief, has been out in force, helping to clear roads and evacuate drivers across various regions including Cantabria and Leon, where 161 troops were deployed to "clear the way into the town, clear roads and the route to the hospital" around the town of Villablino.

Troops helped 61 people in 49 vehicles that had become trapped due to the heavy snowfall around the town, deploying snow ploughs to clear the snow from the roads.

Spanish national weather agency Aemet has said temperatures are set to drop further on Friday, while 28 provinces remain on alert for low temperatures.