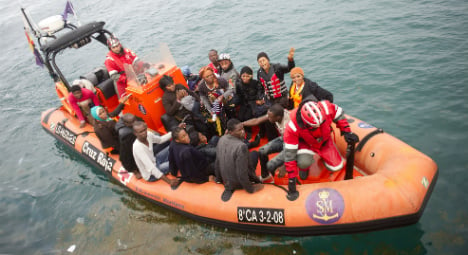 Officers detained the ten Algerians, who are thought to have smuggled "dozens" of migrants into Spain, in Almeria and Murcia in southeastern Spain, including the suspected leader of the gang, police said in a statement.

Police said they opened their investigation in November 2014 after two boats carrying a total of 38 Algerian migrants, including two children, were intercepted off the coast of Almeria in southern Spain.

Officers concluded during their investigation that two migrants fell overboard and were lost at sea during crossings organised by the ring.

During one attempted crossing the motor of the boat broke down and four of the suspects who were detained set fire to a drum of gasoline in the hope of being spotted by maritime rescue services.

"This act accidently burned the clothes of four occupants of the boat who were forced to jump overboard. Three were able to return to the boat and the fourth drowned," the statement said.

Police did not provide details on the other migrants who they believe fell overboard during a crossing organised by the ring.

Thousands of migrants fleeing war and hardship try to cross the Mediterranean to reach Spain from North Africa on makeshift boats and inflatable dinghies each year in the hope of a better life in Europe.