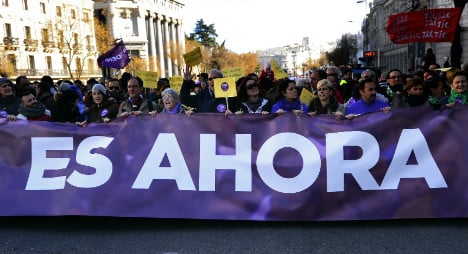 Protestors holding a banner reading "it is now" during the "March for Change" of political party, Podemos, on January 31st, 2015. Photo: Gerard Julien/AFP.

The poll, carried out by Spain’s national statistics agency (CIS) shows 23.9 percent of Spaniards intend to vote for Podemos, compared to 22.2 percent for the PSOE.

The right-wing Popular Party (PP) remains in the lead of voter intentions; 27.3 percent of Spaniards plan to vote for the current ruling party.

Podemos, led by charismatic political scientist lecturer Pablo Iglesias, have been riding a wave of popularity after their 'march for change' saw hundreds of thousands of people descend on Madrid’s central plaza to call for a change to the traditional Spanish political system.

The fledgling party, which only just celebrated its first anniversary on January 17th, has captured the imagination of many Spaniards with its calls for a major shake-up of Spain’s traditional two-party system and criticism of what it sees as a corrupt political elite.

The new poll results will come as a further headache to Socialist leader, Pedro Sánchez, who was recently criticized on social media for his close collaboration with the ruling PP party in signing a new anti-terror pact.

The poll was carried out by Spain's national statistics agency between January 2nd and 12th. It also showed that if a general election was called tomorrow, Podemos would win 19.3 percent of the vote, ahead of the PP (12.9 percent) and the PSOE (12.4 percent).