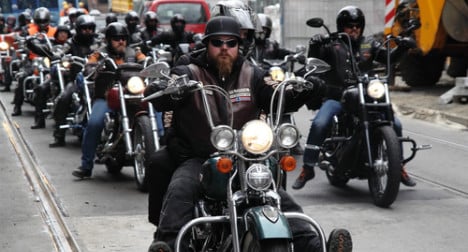 Spanish police originally raided the Hells Angels Motorbike Club, home to the island's German mafia, in 2013, a coup that led to the arrest of one of the most important Hells Angels figures in Europe, Frank Hannebuth, now imprisoned.

Now, a total of 55 gang members are facing 17 charges, among them extortion, sexual exploitation and money laundering.

The gang was established on the holiday island of Majorca in 2009 by Hells Angels members fleeing Germany, where they were wanted by police.

Their main source of income came from prostitution, bringing girls to Spain who "looked like tourists" only to force them into the sex trade on their arrival in the country.

The gang forced many of the women to undergo cosmetic surgery "to make the product more attractive," according to Spanish daily ABC.

The women were forced to sleep in cages "like dogs" according to the investigation.

The biker gang also trafficked drugs, according to the investigation, using women from South America as mules, to bring the drugs to Europe.

In court papers released on Tuesday, February 3rd, the magistrate pointed out that Europol cited the Hells Angels Motor Club (HAMC) as "among the principle biker gangs operating outside the law on the continent."

As well as members of the gang, three police officers are facing charges. According to the investigation, they knew all about the gang’s illegal activities and “accepted them and adapted to their plans”.

The judge has given the public prosecutor 15 days to present written charges against the 55, while a search has been launched for 11 other members who have still not been located.