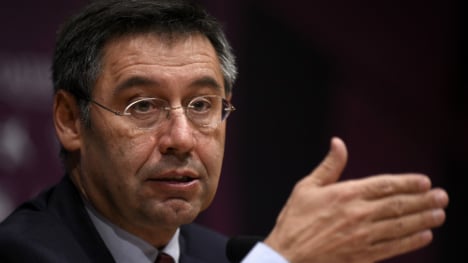 Bartomeu has been ordered to appear before Judge Pablo Ruz at the National Court in Madrid on February 13th as a suspect over alleged tax evasion worth €2.85 million ($3.26 million).

"It must be investigated whether the sum of €2,845,700 was defrauded from the public treasury by FC Barcelona and its current leaders, with Josep Maria Bartomeu as president," the judge wrote in a ruling.

The summons followed a call by public prosecutors on Monday for Bartomeu and the club as a whole to be tried on the tax fraud allegations relating to the 2013 signing.

FC Barcelona reacted to that request with "surprise, indignation and total disagreement", in a statement on Tuesday ahead of the judge's summons.

The judge will now question Bartomeu and later decide whether he should stand trial.

The prosecutor alleges that the club and its former president Sandro Rosell paid more for Neymar than the €57 million that they declared to the Spanish taxman.

They believe the figure was €82.7 million divided into separate contracts that secured the signing.

"All of the actions involved in the player's transfer process were conducted with no intent whatsoever to breach the law in any way," the club said.

According to the Spanish tax authorities, Barcelona owe €12 million in tax on the Neymar deal, which would see the overall cost of the operation rise to €94.8 million.

Rosell resigned as president over the affair just over a year ago when a complaint brought by one of the club's members for misappropriation of funds was taken to court.

In his testimony before a judge on the case in July 2014, Rosell insisted that Neymar cost the club €57 million, 17 of which went to his former club Santos and 40 million paid to N&N, a company owned by the player's father.

However, following Rosell's resignation, Barcelona also confirmed a number of extra agreements including a €10 million signing bonus for the player and scouting and collaborative agreements between the two clubs taking the total to €86.2 million.

In February of last year, the club announced that they had made a voluntary payment of €13.5 million to the Spanish tax authorities regarding the transfer.