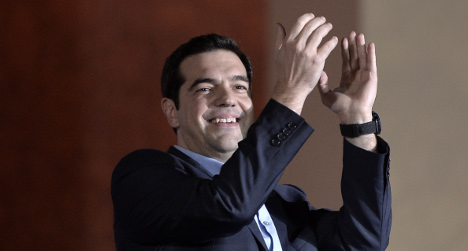 "In Greece tonight, we are already hearing that. We are hoping we will hear the same thing in Spain soon," he told a gathering of about 8,000 party faithful in the eastern city of Valencia.

"We are going to be smiling tonight."

According to exit polls, Syriza took between 35.5 percent and 39.5 percent of the vote, ahead of the conservative New Democracy party of incumbent Prime Minister Antonis Samaras.

On Monday morning, with almost all votes counted, the party looked set to win 149 seats, just short of the 151 required to vote without coalition partners.

Spain's conservative Prime Minister Mariano Rajoy earlier Sunday warned austerity-weary voters against the temptation to back Podemos in elections due this year.

He said that hard-won economic recovery must not be lost by a voter "leap in the dark".

"We can not bet our future and that of our children in a frivolous game of Russian roulette," Rajoy told a congress of his Popular Party in Madrid.

The head of Spain's socialist PSOE, Pedro Sánchez congratulated Syriza on its victory via Twitter, offering his support to the people of Greece.

Like Syriza, Podemos has found considerable popular support by rejecting austerity programmes adopted to try to lift the countries out of deep economic crisis.

The party, formed in early 2014, stormed to prominence when it picked up five seats in the May 2014 European elections. It has since gone on to top polls of Spanish voter intentions, threatening Spain's two-party system.