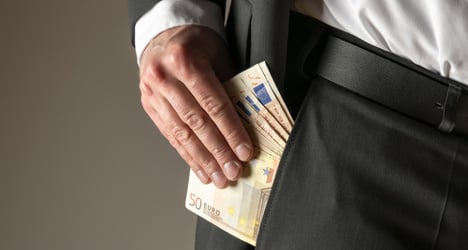 Photo of man putting notes in his pocket

Crimes now being investigated include money laundering, forgery, bribery and illegal negotiations by public officials, among others.

On Thursday, officers were told to search for documentation linked to Alejandro de Pedro Llorca and his businesses Eico Online and Madiva Editorial.

Alejandro de Pedro, considered one of the chief figures in the kickbacks scheme, was granted bail on October 30th after paying €50,000 ($57,000).

Over 30 people were arrested when the case broke, with the highest profile figure being Francisco Granados, the former number two with the Madrid branch of Spain's ruling Popular Party.

The case threw the spotlight back on corruption in Spain, with Spanish Prime Minister Mariano Rajoy going on to apologize for the situation.

Rajoy's apology came at a very sensitive time for the government with other party members wrapped up in a credit card scandal involving Spain's Caja Madrid and Bankia financial institutions.

Around 80 top executives at the banks, including ex-IMF boss and PP member Rodrigo Rato, allegedly used "phantom" credit cards to make personal purchases which were never declared according to Spain's anti-corruption prosecutor.