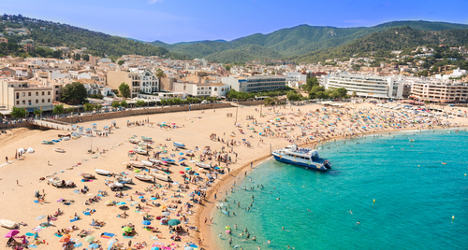 Photo of a beach in Calella de Palafrugell, Catalonia: Shutterstock

The number of international visitors to Spain has risen by 7 percent, the highest increase in 14 years, according to Spanish daily, El País.

Nearly a quarter of all tourists are British, 14 million holidayed in Spain in 2014, a five percent increase on the year before.

More than 10.6 million visits were made by French tourists and 10.4 million by Germans. The Nordic countries were in fourth place with five million visitors, 3.5 percent more than in 2013.

Catalonia, the Canary Islands and the Balearic islands are the most popular Spanish holiday destinations, claiming 60 percent of all visitors to the country.

Minister for Industry, Energy and Tourism, José Manuel Soria said Spain "has established itself as the third most popular destination in the world", after the USA and France.

"Tourism is one of the key sectors in Spain’s economic recovery", the minister said.

Spain climbed out of recession in 2013 after five years of economic crisis that destroyed millions of jobs.

The latest unemployment data, also released on Thursday, showed Spain's jobless rate at 23.7 percent in the final quarter of 2014.