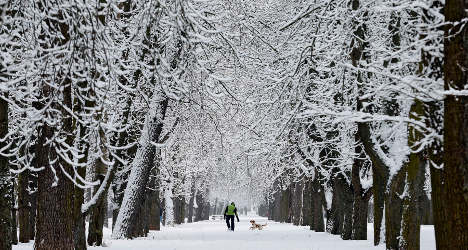 A man plays with his dog in Burgos, northern Spain, after a snowfall in February 2013. Photo: Cesar Manso/AFP.

Spain’s national weather agency (Aemet) has issued an orange warning that between 22 and 24 centimetres of snow is likely to fall in Asturias on Monday, the Spanish Huffington Post has reported.

A total of 37 provinces are currently on alert for strong waves, rain, cold, snow and windy conditions.

Aemet has forecast snow for the provinces of Andalucia, Cantabria, Castilla y León, Navarra, Valencia, the Basque Country and Asturias, while Madrid is currently on yellow alert for snow, with 15 centimetres predicted to fall in the mountains surrounding the Spanish capital.

People took to social media over the weekend to express their disappointment after the snow, which had been forecast for Madrid, was lighter than expected and failed to settle in most areas, despite the fact that many of the capital’s streets had been gritted in preparation.

Temperatures are expected to fall as low as –9C in the middle of the country, in areas such as Guadalajara and the mountains surrounding Madrid.

Málaga, meanwhile, is on alert for high winds, which could reach speeds of over 70km/h.

Madrid’s north African enclaves of Ceuta and Melilla, as well as the southern Spanish city of Cádiz, are on alert for heavy rains while coastal areas, from A Coruña in Galicia to Tenerife in the Canary islands are on alert for strong waves.