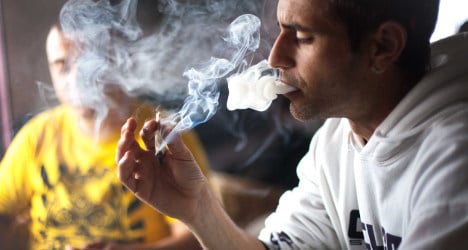 A man smokes a joint during a meeting in celebration of Saint Canuto's day on the Spanish Canary island of Fuerteventura. Photo: Desiree Martin/AFP.

In Spain, Canute IV or Canute the Holy, a former Danish King who became patron saint of Denmark, has seen his feast adopted as a tongue in cheek celebration for the legalization of cannabis, San Canuto’s day, stemming from the Spanish colloquialism for a joint, canuto.

The festivities were spread over three days (January 16th, 17th and 18th) and included the fourth annual Cannabis Cup (Copa de Cannabis) during which participants were judged on the presentation, smell, taste and effect of their cannabis.

The event also included a Hip Hop concert, one of the biggest to be held on the island, which welcomed a whole host of Spanish hip hop acts to Fuerteventura. Dealing in cannabis is illegal in Spain but the law does not prohibit growing it for private consumption. It also allows the existence of smokers' associations or cannabis clubs, which have grown in popularity over the past few years.