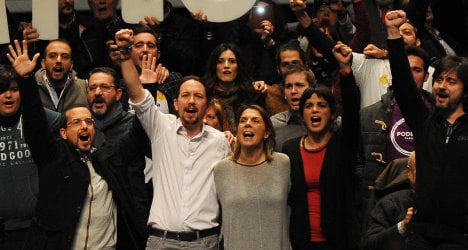 Secretary general Pablo Iglesias told Spanish daily El País that voters will have to choose between Podemos and the conservative ruling Popular Party (PP) – not the veteran Socialist party (PSOE) – in the November election.

"The scenario taking shape for the general election shows there will be two choices: stay with the PP or choose the political change incarnated by Podemos," Iglesias said.

The Podemos leader also took a shot at the head of Spain's Socialist party, saying Pedro Sanchez "is lost, he is doubting."

Born of the movement against the austerity cuts put in place after Spain's real estate bubble burst in 2008, Podemos won five seats in the European parliament in May 2014.

The men are to appear at a Syriza rally in Athens on Thursday, three days ahead of snap elections expected to favour Tsipras's party.