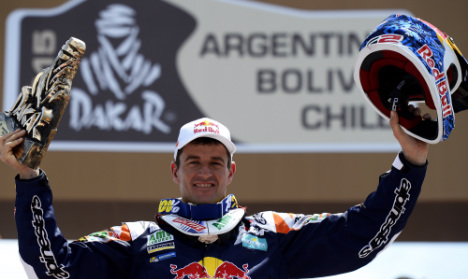 The 38-year-old from Catalonia equalled the number of titles held by French duo Cyril Neveu and Cyril Despres, who now competes in the car category for Peugeot, and one behind another Frenchman, Stephane Peterhansel.

Coma is joined on the final podium by Paulo Goncalves, riding a Honda and almost 17 minutes adrift with Australia's Toby Price, on another KTM, finishing third in the overall standings.

For KTM this was a 14th Dakar success.

He was followed across the line by his compatriot Stefan Svitko with Price taking third for a KTM 1-2-3.

Organizers were forced to shorten the stage as heavy rain had rendered sections of the road too dangerous.

Coma, who came in fifth on Saturday, inherited the lead in the overall standings from Honda's Joan Barreda after the eighth stage.

Finishing in ninth place overall came Laia Sanz, the 29-year-old Spaniard who betterred by one place the highest ever finish for a woman rider.