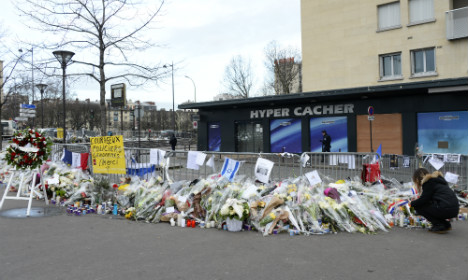 Among the five was Mehdi Sabry Belhoucine and his brother Mohamed, who has already been convicted of terrorism related offences in France, as well as Coulibaly's partner Hayat Boumeddiene, the source told AFP.

"We think they travelled from Paris, going to Madrid-Barajas (airport), without stopping — Coulibaly, Hayat, the Belhoucine brothers, and Mohamed Belhoucine's wife and son."

The five people flew to Turkey on January 2nd with tickets bought over the Internet, the source added.

Mohamed Belhoucine, a 27-year-old former engineering student, was arrested in May 2010 and sentenced to two years in prison for membership in a cell that sent jihadists to a Pakistan-Afghanistan border region. He left jail in June 20A French police source said earlier that Mohamed Belhoucine was already in

Syria where Hayat Boumeddiene joined him. Boumeddiene was seen arriving at an airport in Istanbul accompanied by his younger brother Mehdi.

According to Spanish daily El Mundo, Hayat Boumeddiene boarded a flight to Istanbul on January 2nd at 2.25 pm.

Mohamed Belhoucine and his partner boarded another flight to Istanbul a few hours later with a child, the newspaper added.

Investigators have not found any trace of a hotel reservation for the group, the Spanish anti-terrorism source said, confirming media reports.

The authorities have been focusing on the lack of a hotel reservation, as it could be a sign that they stayed with a support cell in Spain with the capacity to act locally.

Coulibaly was shot dead by police after he killed four Jewish men in a siege at a kosher supermarket in Paris on January 9th.

A Spanish high court judge, who specialises in terrorism cases, opened a preliminary investigation on Thursday into Coulibaly's stay in Madrid.