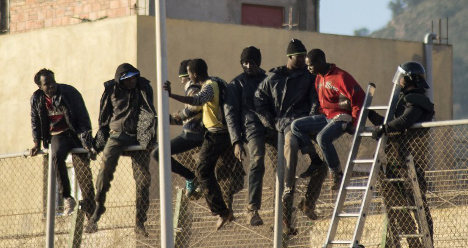 Spain has actually legalized the illegal deportion of migrants who illegally enter Spain by clambering over the border fences into Ceuta and Melilla. Photo: Blasco de Avellaneda/AFP

The footage, filmed on August 13th at the fence between Melilla and Morocco, showed how sub-Saharan migrants trying to climb into Spain were instantly deported by police.

After the video was made public, a case was opened against the coronel in charge for perversion of justice at a court in the north African enclave.

Now the Spanish government has announced that the footage is “no longer available”, arguing that the Interior Ministry stuck to the “established legal deadlines” for deleting CCTV footage.

According to online Spanish daily El Diario, authorities have overlooked that one of the law’s clauses states “unless (the footage) is related to an ongoing judicial case”.

Sources close to the investigation claim the Interior Ministry’s decision represents “an obstruction of justice” and “concealment of evidence .

Other videos filmed by Spain's Civil Guard police and non-government groups have shownwhat happens to the sub-Saharan migrants climbing up the Melilla fence.

Some sit atop the fence for hours before falling off exhausted,getting dragged down by Spanish guards or knocked off by blows from their batons.

"We are totally overwhelmed," one police source told AFP in December.

Under an amendment recently added to Spain’s new Citizen Security Law, authorities can instantly deport migrants who illegally enter Spain by clambering over the border fences from Morocco into Ceuta and Melilla.

But on Friday the instant deportations were declared illegal by the European Council's Human Rights Commissioner, Nils Muiznieks.

After visiting Melilla and Madrid he declared that the practice "sets a very bad precedent" and marks "the beginning of the end" of the system of international exile and protection.