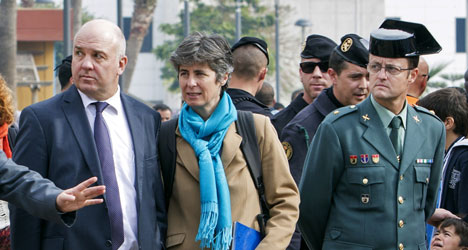 Spain says the measure is needed to help its border guards secure the border of Ceuta and Melilla, two Spanish cities fenced off from Morocco.

Its police have been accused of breaking international rights conventions by beating African migrants who climb the fences into the territories and deporting them on the spot without asylum procedures — so-called "pushbacks".

The human rights commissioner of the 47-nation Council of Europe, Nils Muiznieks, said after meeting officials in Melilla and Madrid that the plan to legalize such deportations was "in clear breach of human rights law".

"In many countries I have seen pushbacks, but nowhere are they legal or legalized," he told a news conference in Madrid.

"It would be a very bad precedent if such practices were enshrined in law because I think that would mean the beginning of the end for the asylum
system."

Spain is setting up new offices to process asylum claims at Ceuta and Melilla's borders. Muiznieks urged it to invest more in such facilities and in its crowded immigrant reception centres.

He said that currently only migrants arriving via the regular border crossings, most of them Syrians fleeing the war in their country, were applying for asylum.

Hardly any of the sub-Saharan Africans who enter by climbing the fence were doing so, he said, in some cases because they were deported on the spot.

In the wake of last week's deadly attacks in Paris, Muiznieks insisted there was "no intrinsic or direct link between migration and terrorism".

"We saw in Paris that the terrorists were French citizens," he said, adding that repressive security measures in response to attacks can do more harm than good.

"It is important to remember and to keep reminding Spain and others about their human rights obligations in the context of counterterrorism," he said.