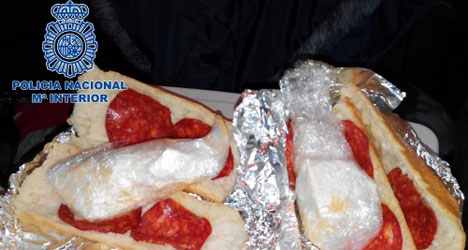 Police believe that they had planned to take the cocaine sandwiches to France in a portable fridge. Photo: Policia Nacional

Three people in the car were arrested after they tried to flee from police. Police believe that they had planned to take the cocaine sandwiches to France in a portable fridge.

The investigation leading to the arrest began in September 2014 when a man was admitted to Zaragoza hospital with gunshot wounds.

According to an official statement, police discovered that the man had been shot during a dispute between gang members.

They arrested him together with an associate who was in possession of a package containing around 1,800 kilos of cocaine. A third man, who had shot the first, was arrested days later in Seville.

Further investigation revealed that the leader of the gang was planning to transport drugs to France.

As police closed in to arrest him, he spotted them and manoeuvred his car to escape but he was intercepted and placed under arrest along with his wife and another passenger. A fridge containing the cocaine and chorizo sandwiches was found during a search of the vehicle. Subsequent searches of the homes of those arrested led to the seizure of 420 grams of marijuana, €2,700 ($3,150) in cash and an air pistol.