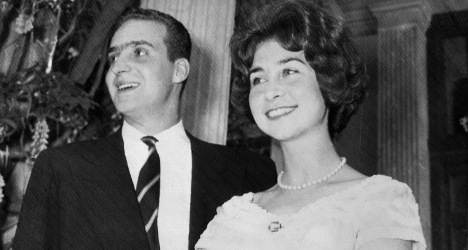 Spain's future King Juan Carlos I posing with his wife, Sofía of Greece, before their wedding in Athens in 1962. Photo: AFP

The court will take on the suit lodged by Belgian woman Ingrid Jeanne Satiau after examining documents offered as proof of a relationship between her mother and Juan Carlos.

A second suit lodged by Catalan Alberto Solá Jiménez will not be heard with the civil section of the powerful court citing a lack evidence.

The Royal Palace would make no comment on the matter when contacted by The Local.

The decision to hear the Ingrid Jeanne Satiau suit comes despite recent calls from Supreme Court for the two paternity suits to be dropped.

Juan Carlos's former constitutional immunity originally put a stop to the two legal suits in late 2012 but when he abdicated in June 2014, he lost that special legal status.

However, he continues to enjoy a special form of legal protection known as 'aforamiento' which means cases against him can only be heard in the country's top courts.

Juan Carlos I abdicated after a series of health problems and various scandals within Spain's Royal Family, notably the criminal case against his youngest daughter, Princess Cristina, and her husband Iñaki Urdangarin.

In a first for the royal family, Cristina is set to appear in court on two counts of tax fraud, each carrying a sentence of four years.