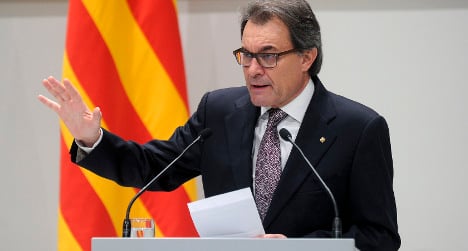 The President of Catalonia Artur Mas on Wednesday during a press conference calling early elections in the region with breakaway aspirations. Photo: Josep Lago/AFP

The announcement ends months of speculation in the region since Mas defied the central government in Madrid to stage a symbolic independence vote on November 9th,

Mas was speaking at a press conference — originally scheduled for Thursday — after a four-hour meeting with Oriol Junqueras, the head of Catalonia's left-wing, pro-independence party, the ERC, which has come ahead of the ruling coalition led by Mas in recent regional voter intention polls.

Those polls have highlighted an increasingly fragmented political landscape in Catalonia following the controversial vote.

The vote, which was to take place in 2016, will now be held on September 27th, a date agreed to by Mas and Junqueras. But there will be no unified list of independence parties, Mas said.

Mas said, however, there would be a unified "road map" towards independence. He described this as "very advanced".

"The climate of consensus (between the region's political parties) had been growing weaker" said Mas, "but today, happily that has changed."

The Catalan leader went on to apologize for the political uncertainty in the region in recent times.

The newly-announced September 27th date is significant as it comes just weeks after the region's September 11th national day, or Diada, when independence feeling in the region is at its peak. The first day of the official campaign will be September 11th.

Spanish Prime Minister Mariano Rajoy, a staunch opponent of Mas has previously described the idea of early elections in the region as "a road to nowhere".

Mas is currently under investigation by the Catalonia High Court for staging the November 9th independence poll. Prosecutors say he may have committed crimes including civil disobedience, abuse of power and embezzlement of public funds for holding the vote despite a legal block by Madrid..

More than 2.3 million people of a total voting population estimated at around 5.5 million people cast their ballot in the poll, 80 percent of them backing secession from Spain.