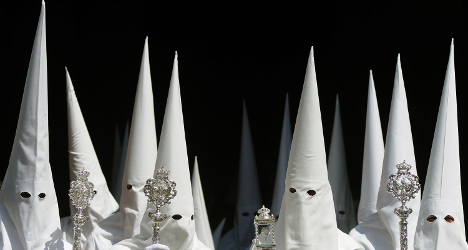 Penitents walk to church at the start of the 'La Paz' brotherhood procession during the Holy Week in Sevilla in 2011. Photo: AFP

No one does Semanta Santa better than the southern city of Seville, however, which is why recent comments in Spanish daily El Mundo from Begoña Gutiérrez, the provincial secretary of Spain's Podemos party in Seville, caused such a stir.

Spain's Twittersphere lit up on Monday as the rumour spread that Podemos planned to ban the festival.

Even the mayor of Seville Juan Ignacio Zoido felt compelled to weigh in on the debate, saying in a tweet that Semana Santa had five centuries of history and that no politician could decide upon its fate.

But Gutiérrez was quick to say her words had been taken out of context. What she had in fact said was that "If it came to a vote (on the future of Semana Santa), the people would decide".

"Semana Santa is part of Seville's cultural heritage and Podemos Seville doesn't question the celebration because we from Seville as well," she said in a tweet on Monday in the wake of the controversy.